On this clear April day in St. Louis, the boos rained down on the Pittsburgh Pirates – first in a torrent, then in waves – all the while with Satchel Paige at the maelstrom’s center.

The novelty of seeing these new-look Pirates with their Negro League additions had worn off by opening day game’s end, and the vitriol of tens of thousands was not assayed by the presence of those segregated in the leftfield seats who’d come out to see the legend again, only this time in a Pittsburgh uniform.

END_OF_DOCUMENT_TOKEN_TO_BE_REPLACED

Not quite 1938 Opening Day – that was April 18, the previous day, with the traditional Washington Senators home opener and a Red Sox-Yankees meeting – but for many Americans, the true Opening Day came day later with the Pittsburgh Pirates-St. Louis Cardinals opener.

Sportsman’s Park overflowed past its 34,000-plus capacity, standing room only for those breathless with anticipation greater than even the usual inaugural Cardinals game.

Most came to cheer on the hometown Cardinals of Johnny Mize, Enos Slaughter and Ducky Medwick to the pennant contender’s first win of many in ’38, but all were there for the curiosity of history in the making, to see the famed stars of Negro League Baseball that few white fans had actually ever seen play. Indeed, a certain section of the leftfield bleachers cheered equally loudly during Cool Papa’s at-bats and they did for the Big Cat’s.

The air buzzed with the thrill of one hundred opening days, the giddy excitement of a new chapter begun for the entire nation. Baseball, ever the bastion of the old days, was now leading a social revolution.

The lineup
For the starting lineup to face Cardinals lefty Bob Weiland, Pirates manager Alternate-Universe Pie Traynor was on the wavelength of Paul Francis “Sully” Sullivan’s 2011 piece for The Hardball Times, The telegram to Pie Traynor and the lost Pirates pennant of 1938 and constructed a lineup with Hall of Famers in the top six spots.

The game
Perhaps it was the pressure, the overbearing presence of photographers and reporters, the jeering the Pirates took for nearly every plate appearance, bats on both sides stayed as ice-cold as though they’d missed the spring training games the players hadn’t.

Opening the game for the Pirates to a cacophony of competing noise, Cool Papa Bell worked Weiland to a full count before drawing a walk. Surely fearing Bell’s lightning speed, Weiland held him tight to the bag; twice Bell looked set to bolt, only to be denied a jump.

The Redbirds finally cut loose in the bottom of the 6th with a couple of walks, back-to-back doubles and a passed ball muffed by Gibson resulted in four runs and Brown coming in for relief. The Bucs fought back with three runs in the top of the 7th, with all heroics due to unexpected sources: Doubles from Handley and Young ultimately led to three runs in the half-inning.

The Pirates bats again would again go silent, though, with the sole baserunner in their final two innings coming on Leonard’s first MLB hit, a single to right, a runner quickly erased with a GIDP on the subsequent at-bat.

Opening Day for the AU ’38 Pirates will forever go down in baseball history, but unfortunately not for an outstanding result on-field. Pittsburgh’s three new batters went a combined 1-for-11 with a walk; indeed, the Pirates’ big six managed just four hits and a walk in 23 plate appearances with zero RBI and zero runs scored. A disappointing result for would-be world-conquerors, to be sure, but it’s a long season. 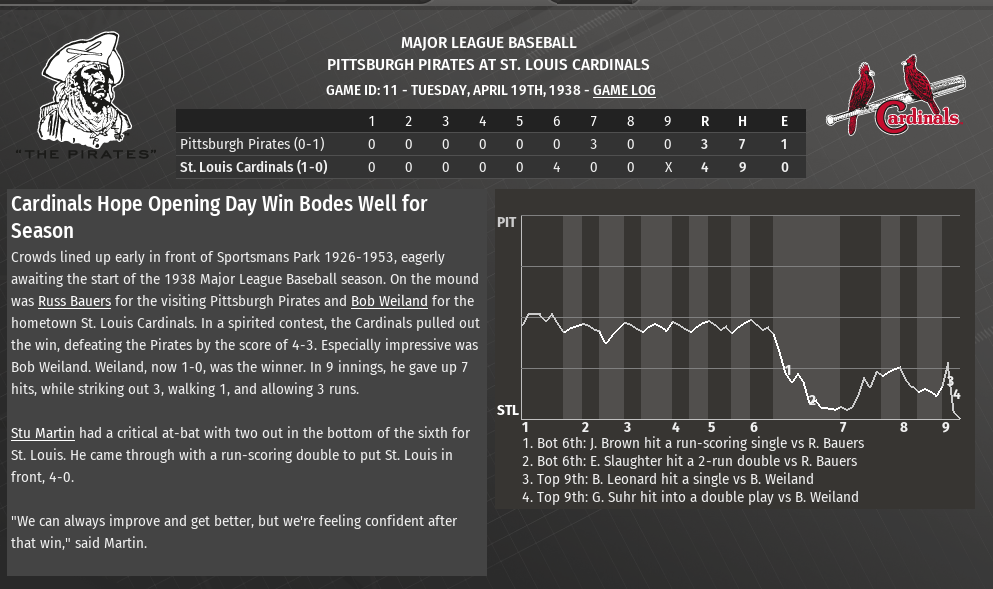 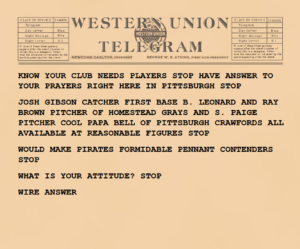