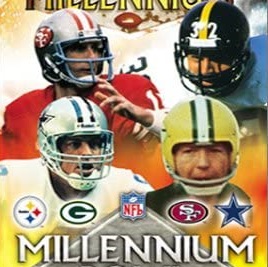 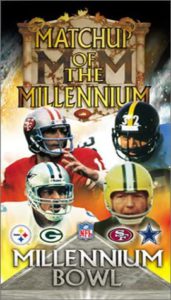 NFL Films material is tweaked with some early CGi and colorization technology for the visuals. Play-by-play, commentary and sideline reporting  are done by the likes of Mike Patrick, Joe Theismann, Ron Jaworski and Howard Cosell (more on this shortly). To abbreviate the proceedings, parts of each game are summarized NFL Films-style with voiceover provided by John Facenda, with some halftime chatter and highlights (you kow, in case you missed the previous 30 minutes).

Now let’s face it: MotM is high in cheese content as the scripted material tries painfully hard to explain away stuff like why stock-footage Steelers fans are dressed 1970s-style (but not why they’re wearing jackets and tuques to a day game in Texas). Sometimes these bits work – Jaws is quite good in his sideline stuff – but usually are just groan-worthy.

Frankly speaking, Truly the GOATs doesn’t understand why ESPN Productions couldn’t just take a page out of the Star Trek: The Next Generation textbook and say “holodeck tech” to be done with all of the nonsense.

And then there’s Cosell. Samples of Cosell quotes from Monday Night Football and other sources are awkwardly pigeonholed into the commentary. These non-sequiturs are surrounded by some seriously stilted commentary; seriously, every line from Patrick begins or ends with “Howard.” The end result is to make Cosell a complete bombastic asshole who expresses himself alternatively eloquently and crudely.

Nevertheless, “Matchup of the Millennium” is worth a watch. Three of the four episodes – The Millennium Bowl game was split into halves, kinda like the last Harry Potter movie – are available on YouTube, replete with commercials; copies are available online in a couple of formats. Below are embedded the two first-round games, so as to avoid spoilers.

(Incidentally, with the dissolution of the Belichick-Brady combo in New England, isn’t it about time for the Matchup of The Millennia…?)