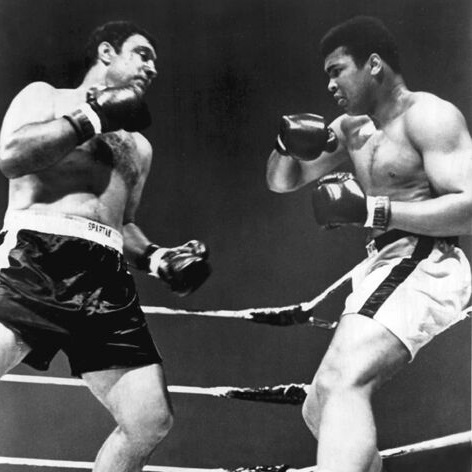 Full disclosure: A white guy is about to write on boxing, so…

In 1969, the term “Greatest of All-Time” was rarely used in sports media, even though the most famous athlete in the world had proclaimed himself such repeatedly for years. When his title was forcibly vacated in 1967, Muhammad Ali became just the second fighter ever to “retire” an undefeated champion at 29-0. The first, of course, had been Rocky Marciano.

Despite retiring at age 32 with an incredible record of 49-0, boxing fans today usually apply an asterisk, arguing that Marciano fought during a general plateauing of talent in heavyweight boxing. Sure, Marciano had beaten former champions Joe Louis, Jersey Joe Walcott (twice) and Ezzard Charles, but all were past their prime when Rocky fought them. (Incidentally, Joe Louis was not 75 or 76 when matched up against Marciano – though he was an old-if-you’re-not-George-Foreman 37.)

A bit of technology coming up in popularity in the late 1960s was this wacky new tool called the computer, which was getting put to all sorts of interesting tasks in various locales from various military uses to helping analyze astronomical data to … simulating all-time tournaments.

In 1967, radio Murray Woroner created a mythical tourney of 16 boxers whose career performances had been painstakingly entered as data into a big ol’ number cruncher. In that tournament, with each of the 30 fights scripted and “called” by color commentators, was broadcast nationally; the winner was Marciano over Jack Dempsey (What? Not Joe Louis?). Sim Ali, meanwhile, lost to sim Jim Jeffries in the round of eight. Jeffries boxed in the 1890s/1900s; he was called the “Great White Hope” when coming out of retirement to fight Jack Johnson and, in his own words, “with the sole purpose of proving that a white man is better than a negro.”

Real-life Ali was not amused and attempted to sue Woroner for $1 million for defamation of character. Woroner saw the legal threat as a golden opportunity for his production company to break into visual media: He settled with Ali out of court for $10,000 and the agreement that Ali would star in a film to be called “The Super Fight” which would be based on a fictional bout between the two undefeated heavyweight champions.

The Univac was put to work again and cameramen and choreographers went to work with Ali and Marciano, acting out various scenarios and actions. The result was a 60-minute movie shown in American cinemas in January 1970; for some reason, the version for international distribution featured a different outcome for the fight. For fear of spoilers, no more will be spilled here.

All in all, this is pretty compelling stuff. Truly the GOATs is not sure why this kind of production doesn’t happen more often. Jordan’s Dream Team vs. Kobe’s 2012 Team USA, anyone…?

And here’s the alternate ending:

8 Replies to “The Super Fight: Rocky Marciano vs Muhammad Ali”