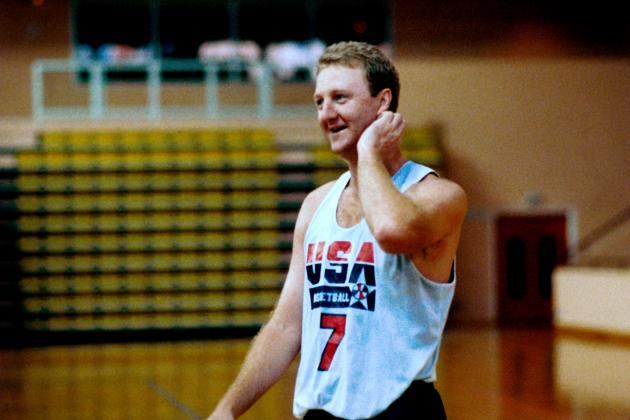 Magic Johnson: Wow. God is so good. And Cynthia, I know you talked about your mom being in front of that flat screen, but joining her at their flat screen is a man who had a three-piece suit and his hair all the way together. He had the nicest tie on. And he was our leader and that was Chuck Daly.

So God brought him home to join Him. And we want to say thank you to Coach because he was the architect that put it all together, made sure that we checked our ego at the door, made sure that we were just about playing with one another, and playing for one common goal, and that was to bring home the gold medal.

I want to thank all these guys because it was my greatest basketball thrill was to play with all of them and to go into the Olympics and win the gold medal.

We’d like to thank David Stern for allowing us to do it and put it together, whereas he’s the greatest commissioner of all of sports. I know he’s somewhere. Stand up, please, to our great commissioner, Mr. David Stern. Thank you.

We also want to think Mr. Wall. Mr. Newton, because they were big parts of it. We want to also thank what Mr. Coleangelo is doing right now for USA basketball and Coach K. as well, so give them a hand as they get ready to go into battle.

Last but not least, I want to thank Michael Jordan for setting the tone for us and a winning attitude. The greatest player, when he came in the door, we knew we was all about business.

I want to thank Charles Barkley, as he really dominated the play and was our best player and all those games.

I want to thank Patrick Ewing for that beautiful jump shot and always making us all laugh and have a good time, David Robinson for controlling the middle and making sure nobody came down there.

And I want to thank John Stockton for always being under control and throwing the prettiest bounce passes of anybody.

I want to thank Karl Malone, as he went down the middle and everybody just moved out the way and said “No way am I taking this charge.”

I want to thank Clyde Drexler, as he took off so well in the air and just glided like Clyde the glide that he was.

And last but not least, L.B., you and I, brother, we came in together from college. It was a joy, man, to be alongside of you. I know your back was hurting. You didn’t want to play. I called your butt up and I said, “You going to play?” We needed this thrill one more time. And I remember Michael Jordan sitting there and telling us – remember this? We were sitting there, and he took a puff of his cigar and he said, “Larry and Magic, you had your run – but there’s a new sheriff in town!”

And Christian Laettner. I didn’t forget about you. You thought I forgot about you, didn’t you? I remember the first day of practice, brother, and Charles Barkley hit you so hard and you went down to your knees and he said, “Welcome to the NBA.”

Coach Wilkens, coach P.J., we say thank you. It was an amazing run. And we want to thank all of you. So L.B., I’m gonna let you close, brother.”

Larry Bird: It’s like always: He left me 20 seconds.

I just want to congratulate all the inductees tonight, all of them very well deserving. It’s a special honor to play with these young man. After 1992, which was my last game competitive I ever played in, a pretty good way to go out winning a gold medal and play with, well, I can’t say the best team ever assembled, but one of the best teams ever assembled…

The cast of characters, the different personalities, and Charles Barkley. But we had a lot of fun. You know, this group of guys here, I don’t … you know, there’s a lot of debate going around who had the best team, the ones in the 60s or the one in ’92. I don’t know who had the best team, but I know the team in 1960 was a hell of a lot tougher than we were. Because I couldn’t imagine the ’92 team getting into covered wagons for eight days, going across the country, jump in the Atlantic Ocean, swim for six days, then walking 3000 miles to the Colosseum in Rome for a dollar a day. Thank you.